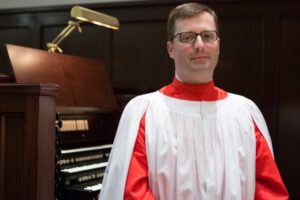 ​Dr. Giles Brightwell, born in London in 1970, attended Harrow School and was educated at Durham University. While in Durham he had four fellowships including both choral scholar and organ scholar at Durham Cathedral under Dr. James Lancelot. He led the University Chamber Choir and co-founded the Durham University Consort of Voices with Professor Jeremy Dibble. He was organist of the University Choir Society. After graduation he was appointed University Organist and Tutor in Music at Durham. After two years as a College Organist at the University of Cambridge's Sidney Sussex College, he moved on to become University Organist and Director of the Chapel Choir at the University of Glasgow. While in Glasgow, he led a campaign to raise €500,000 for the rebuilding of the university's Henry Willis III chapel organ, which had been played regularly by Marcel Dupré. In 2001 he was responsible for the music on the various ceremonial occasions to celebrate the 550th anniversary of the university, including premiering Sally Beamish's Caprington Doubles, a brass band commissioned for the honorary doctorate ceremony of HRH the Prince of Wales. at the University. Led by Dr. Brightwell, the Glasgow University Chapel Choir resumed broadcasting on BBC radio and television and an annual overseas tour. In 2002 the choir was invited to sing at Glasgow Cathedral in the presence of HM The Queen at a service to celebrate Her Majesty's Golden Jubilee. After roles at St Paul's K Street, Washington DC and Immanuel on the Green in historic New Castle, Delaware, he returned to the UK for family reasons in 2009 and took up the position of organist and assistant director of music at the Twelfth century Civic and Parish Church of St Mary le Tower, Ipswich, which he combined with teaching singing, organ and theory at the Ipswich School. Between 2010 and 2013 he was a member of the Council of the Guild of Church Musicians and between 2013 and 2016 he was a member of the Editorial Board of the Association of Anglican Musicians.

In 2013, he returned to the USA to take up the post of Director of Music and Organist at St Thomas’ Episcopal Church and School, Houston, TX, where he directed the parish choir, established the choral scholar program and instigated the Moseley Memorial Music Series, a self-financing program that celebrated over 50 concerts in four years. He was principal organist, playing the Schoenstein & Co. organ for the daily school services and at the Sunday liturgies. In 2015 St Thomas’ Episcopal Church and School and Houston Brass Band jointly commissioned a thirty-minute Christmas cantata from the British composer, Philip Wilby. The premiere, attended by the composer, was performed by 151 musicians from both church and school. During his time in Houston, Dr Brightwell was a member of the Music Commission of the Episcopal Diocese of Texas, acting as guest clinician and organist for Diocesan choral festivals; he also worked as a clinician, organist and housemaster for the annual Royal School of Church Music Gulf Coast Course in Houston. In addition to his work for the Episcopal Church, he was assisting organist at the Co-Cathedral of the Sacred Heart in Houston. In 2016, the choir of St Thomas’ Episcopal Church was one of two choirs to be invited to sing at the opening convocation service for the National Convention of the American Guild of Organists held in Houston and attended by 1,800 colleagues from across the USA and beyond.

Following his time in Houston, Dr Brightwell was head-hunted to take up the role of Associate Music Director and Organist at All Saints’ Episcopal Church, a 3,000-member parish in the heart of downtown Atlanta, GA. In addition to the busy round of services and concerts, Dr Brightwell had the honour of playing for the service to commemorate the 400th anniversary of the beginning of the enslavement of African heritage peoples, as well as Diocesan choral services and recitals at St Philip’s Cathedral.

In January, 2021, Dr Brightwell was appointed Organist and Director of Music at the Basiliek Van de Heilige Nicolaas following the untimely death of Michael Hedley. He directs the Basilica’s four choirs for the weekly round of Choral Evensongs and Masses, and, with Assistant Organist, Jos Maters, plays the historic Sauer organ.

In addition to his work as organist, choral conductor, singer (tenor), and teacher, Dr Brightwell’s academic interests include British music of the late-nineteenth and early-twentieth centuries, English cathedral and church music, and institutional history. He has published articles and reviews with Ashgate Press, in the SCM Canterbury Press Dictionary of Hymnology, The Book Collector, in Notes the Journal of the Music Libraries Association of America, the Grolier Encyclopedia of the Victorian Era, and the British Music Society Journal. Having completed an MA in 1998, he completed a PhD in 2006, supervised by Professor Jeremy Dibble on the history of London’s Royal College of Music. He has published compositions with Encore Publications.